The Hatchery is one of the major sub-locations in the main isle and the second place that allows you to hatch your dragon. This is where you are teleported to during The New Student and after taking the Personality Test, you can choose and hatch your Primary Starter dragon. 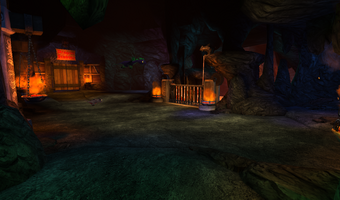 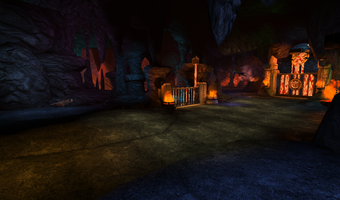 Right section
The Hatchery is an underground, volcanic cave inhabited by hatchlings of multiple species and used as a welcoming place for new players to start their bond with their Primary Starter dragon, new players are automatically teleported from Berk Docks during The New Student after taming their Secodnary Starter dragon.

It's quite open and wide to walk around but too tight for a dragon to fly, despite the location allowing players to fly their dragons. What the location doesn't allow is firing with your dragon, possibly implemented to avoid causing massive lag by players constantly firing while a new player with a very unstable game has MMO turned on. 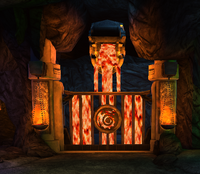 To the left side of the entrance, there's a shortcut to the Stables which can be accessed at any time while to the right side, there's a secondary section to the Hatchery which, unlike the primary section, it hasn't changed after the v2.2.0 update. Before the v2.2.0 update, players could check the riders and their respective dragons, clicking on the dragon would pop-up a window with one sentence describing the dragon. The reason for its removal is unknown, however the Hatchery now spawn two random hatchlings of any species and colors. 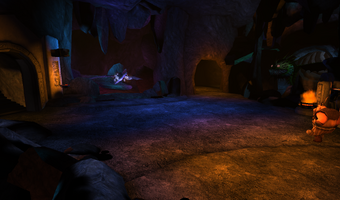 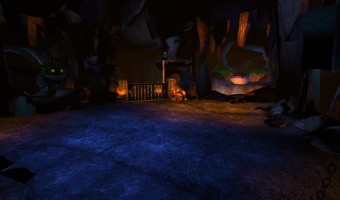 On the secondary section is where the member Primary Starters are located at. Because they weren't changed nor removed in v2.2.0, you can still click them to unveil their sentences describing them and instead of Valka, it's Gobber the Belch who's located here. In here you can access the second floor of the primary section, exit the hatchery or go back to the primary section.

Down below are all the sentences that each dragon gave:

On both the primary and secondary section, there's a special gate that upon a close approach, the lava will stop dropping down on it, allowing it to open and allow access to the lower floor.

Overall backview of the lower floor

The lower floor is a very wide, open space with a "second floor" that can be accessed by turning to the respective sides after entering through the gate, it's in here that you get to choose your Primary Starter dragon and start a bond with it. The place is filled with multiple nests of each Primary Starter dragon species, with a sign saying "Members only" for three certain dragons species . As for v2.2.0, the area is filled with a hatchlnig of the respective species, they are often just sit down by their species' nest or flying around or nearby it.

However, the biggest mechanism located in this section is the Dragon Hearth. 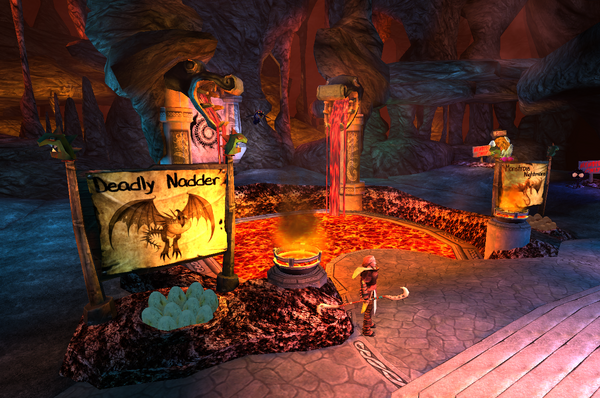 Left section of the Dragon Hearth

Right section of the Dragon Hearth

The Dragon Hearth is a special location that allows you to not only hatch your dragon but to also grow your dragon up to Adult stage, to learn how to grow them to their Titan stage, visit Titan Island. To the sides of the Dragon Hearth is where the Starter Dragon eggs are located, with the Member Starter Dragons having a sign saying "Members only!" and each nest contains either a hatchling of the respectively flying or sit down.

Each time the player goes to it with the active dragon, a pop-up will appear asking if you wish to spend gems to grow your dragon, however, if the dragon is at level 5 or 10 respectively, a pop-up will ask if you wish to grow it and if clicked on yes, the customization screen will pop-up, allowing the player to customize it for free. Valka, the one who teleports you by the Dragon Heart and gives you the Personality Test, is always located by it. Before v2.7.0, players had to accept both A Mature Dragon and Dragon Transformation to grow their dragons to teen and adult respectively, for now on, it will only appear once but, players don't have to accept the first time as it is optional.

Retrieved from "https://dreamworks-school-of-dragons.fandom.com/wiki/The_Hatchery?oldid=36529"
Community content is available under CC-BY-SA unless otherwise noted.