The Headmaster is one of School of Dragons' original and the first original character in the game. He's both located at The School and in the Great Hall.

Being an ex-dragon slayer, Heyral is an old, not very tall, tough, bulk, muscular Viking, possibly around the 50-60s.

He has a rounded face with a fairly big rounded nose, small almond-shaped brown eyes. His hair is grey-ish white, shoulder-lenght and tied and loosely braided on the back. He has very long moustaches, that are braided for about 2/3 of their length, from the tip, and a similarly very long and fluffy beard, braided just at the tip. He's missing an upper tooth, and he wears a prostethic axe on his right arm, as he lost his hand.

He wears a long woven musk green tunic, over black pants and simple furry brown boots. At the waist he wear a large leather belt with metallic studs and a big round metallic buckle decorated by an engraved motif. He wears pauldrons made with brown fur, and an engraved metallic disc on top, a metal bracer on his left arm, and a conical metal helm with two pairs of horns on the side.

"The Headmaster sometimes comes across as a strict teacher who demands nothing but the absolute best from his students. However, new students should know that his severity comes from his experience with dragons. The Headmaster is aware that danger lurks around every corner, and he wants to ensure that his dragon trainers will be ready to take on any challenge that comes their way" [src].

He seems to really have left behind his warrior days, not having even time to remember that period of his likfe, and he's relieved that vikings no more have to fight dragons [src].

The school’s Headmaster is a legendary warrior in Berk. In his younger years, he was known as Heyral the Bloodthirsty, who fearlessly defeated countless dragons. As word of his valor spread, many claimed to have witnessed dragons flying away in fear whenever they saw him on the battlefield!

In addition to defending his village from dragons, Heyral led many seafaring expeditions to find the dragon’s nest of legend. Although he came back empty-handed each time, his final expedition was not only a failure, but it put an end to his career. While he never spoke of what happened on that trip, rumor has it that the Headmaster discovered a nest of baby Deadly Nadders. Though the dragons were his mortal enemies, he could not bring himself to put down innocent hatchlings. Ashamed of his own weakness, he laid down his axe after the journey and retired.

Despite his vow to never fight dragons again, fate had different plans for Heyral. Years after his retirement, news of Hiccup’s innovative approach to taming dragons reignited his interest in these winged creatures. During his time as a dragon slayer, Heyral had also developed invaluable insight into the strengths, weaknesses, and biology of dragons. This knowledge made him the top candidate for the role of Headmaster at the School of Dragons.

You can find him in:

As the Headmaster, he's responsible for all of the students at the school. He is mostly present in the early tutorial-like quests that introduce the School and several game mechanisms, like minigames and the Adventurer's Journal.

The Headmaster is also the starting point of all the Expansion Packs.

In The Headmaster's Wild Ride, Heyral rides Meatlug to Icestorm Island to visit this new land. He also takes an interest in the Speed Stinger.

He's the one that controls the Chat in case the player says symbols, inappropriate words and/or numbers (abbreviated and unabbreviated). However, because of the exaggerating security on the Chats, players end up in making a new vocabulary to say numbers (1,000 is I O O O; Three is tree, ect).

Heyral remembers Skulder from when he used to live in Berk, and he's glad to know he's doing well [src].

The only NPC on which the Headmaster seems to have an opinion. He says Snotlout is "an abrasive Viking, but he's hard working and comes through in the clutch." [src] 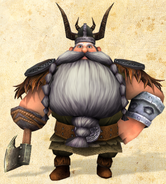 The Headmaster in the loading screen's tips
Add a photo to this gallery
Retrieved from "https://dreamworks-school-of-dragons.fandom.com/wiki/The_Headmaster?oldid=42186"
Community content is available under CC-BY-SA unless otherwise noted.