The Wilderness is one of the main zones of the island and just like The School, it's shown to be part of the large caldera. To unlock the Wilderness, you have to complete the Wilderness Training.

The Wilderness is an important location due to be home and needed of numerous missions; its main mission, Wilderness Training, unlocks roughly more than 8 missions as well as the Expansions' first mission; it contains plenty of fishing spots (4 freshwater spots on the main lake and 1 nearby the waterfall that leads to said lake); especial trees for a few missions; and, it also contains the main entrance to Icestorm Island.

The Wilderness is a part of the caldera with large, rocky, mountainous layers between the center and the outside. In the center, it's a grassy plain with a few woodland around the left and right side; a rocky, mountainous valley-like part; a geyser on the left corner; and a medium-sized lake on the bottom right corner.

In front of the exit of the Wilderness, there's a bridge that leads of a rocky plain (with the teleporter) with a path going downwards, a few plateaus on the right side and a rocky path that leads to a small cliff. Below the bridge, it's a part of the large waterfall that goes from the very left to the right side of the island.

On the very center of the Wilderness, there's two platforms which will then lead to a third platform on the rocky formation on the other side of the island. The small cliff and the platforms are used in the mission Missing Viking where you will have a small practice on gliding with your dragon in terms of staying in the air as much as you can and landing on platforms. 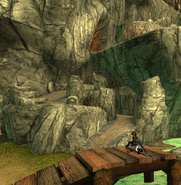 The beginning of the path

Middle of the path

Inside one of the caves

In the middle of the woodland, there's 4 trees (much smaller and are lighter) whom are used to get wood for a few missions. After an unknown update, cutting trees for wood won't give Dragon XP anymore.

On the opposite side of the woodland, there's a large lake filled with fishing spots.

There's in total of 5 fishing spots, all freshwater.

Eel Fishspot on the island

Second fishspot nearby Mulch
Retrieved from "https://dreamworks-school-of-dragons.fandom.com/wiki/The_Wilderness?oldid=26955"
Community content is available under CC-BY-SA unless otherwise noted.