This is the store's default tab when opened from most locations.  While this tab does contain the newest items released in-game, the items are not in order starting with the newest.

Players can purchase gold here, exchanging either 60 gems for 400 gold or 100 gems for 800 gold.  While the section uses the word 'coins', both items contained within use 'gold' instead.

Expansion packs can be purchased here, with the option to buy each of the three expansions separately or to purchase a bundle containing all of them.  Usually the bundle costs the same amount of gems as it would to purchase each expansion separately, only a way of reducing the number of clicks needed to buy all of them.  However, the bundle tends to become discounted after the release of a new expansion pack and lasting for two or three months afterwards.

In this section players can find items packaged together for easier purchase.  When not on sale, each bundle costs the same to purchase as it would be to buy all the items it contains one by one.

Worthy of particular mention, the Crate of Consumables is currently the only way to obtain Energy Booster power-ups.

Items that are at a lower-than-usual price are listed here.  The length of each item's sale varies but players are given warning when an item has less than 24 hours of its sale remaining.  When that happens, additional text will be added to the 'Sale!' marker in the upper-left corner of the item's image, telling players how many hours the item will still be on sale for.  When an item will be one sale for less than an hour longer, the time given will be listed in minutes.

Here players can find the items most commonly purchased by their fellow players.  Spanning 40 pages, it is unknown if items in this section are listed in order from most to least purchased or not.

This item is used to age your baby or teen dragon into an adult; its section only appears in the store when your active dragon is a teen or baby.  When visible in the store, age-up tickets appear in both the Treasures and and Dragon Store sections.  Age-up tickets can be purchased from the store for 500 gems when your dragon is a baby or for 250 gems when your dragon is a teen.  Age-up tickets can also be purchased from your list of dragons, when you try to enter Flight Club, Fireball Frenzy, or Bull's-Eye Lagoon, or when you stand in front of the Dragon Hearth at the Hatchery without having the appropriate age-up quest for your dragon*.  With the exception of purchasing the ticket from your dragon list, any of the other methods will cause a message to show up prompting you to age your dragon up to continue.

One quest each from the Icestorm Island (expansion), Call of the Deathsong, Battle for the Edge and Return to Dragon Island expansion packs awards players with an age-up ticket.

When using an age-up ticket, players will not be able to customize their dragon for free as they would be able to if aging them up using the A Mature Dragon or Dragon Transformation quests.

During some of School of Dragons' holiday sales, age-up tickets can be purchased for a discounted price. 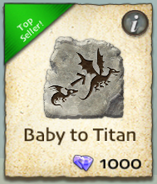 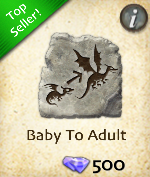 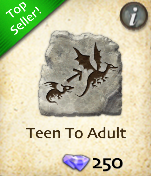 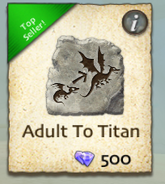 Add a photo to this gallery
Retrieved from "https://dreamworks-school-of-dragons.fandom.com/wiki/Treasures?oldid=39692"
Community content is available under CC-BY-SA unless otherwise noted.