Typhoomerang is still incomplete. Please remove the checklist upon completing all the tasks.

The Typhoomerang is a Stoker Class dragon released on September 12th, 2014. They can be purchased for 750 gems (600 for members) from the store.

"Typhoomerangs have a unique ability during flight: they rotate (by analogy with the typhoon/boomerang) at high speeds, zooming through the air. Though, as they rotate, they seem to pop off the objects around them, making them extremely dangerous. Ash leaves a distinctive burn on the ground. The ash apparently acts as a fertilizer; flowers will grow in the burn mark afterwards

"Typhoomerangs are high strung, hot headed and passionate dragons, and they can be extremely dangerous, or becoming over-dramatic attention hogs. Their flame spirals can be used as a territory marker, or as a mating display. Like all dragons, Typhoomerangs are extremely protective of their young.

"Despite their large size, Typhoomerangs are shown to be very fast fliers, being the third fastest fliers in the dragon world. However, they are not very agile, as their size makes it hard for them to dive, stop, or change directions. It is also revealed that in addition to its supplementary or defensive objectives, a Typhoomerang's 'flame spiral' can also be adapted for offensive usages: it can ignite its body in a manner similar to that of the Monstrous Nightmare. Its attack power is enhanced further by using the spiraling technique, which turns the dragon into a fierce, flaming drill missile. Moreover, it can use this to go faster in flight, which is demonstrated when it spins around in order to fly."

For more information on the Typhoomerang, visit here. 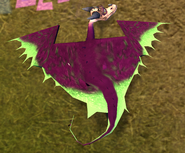 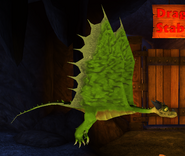 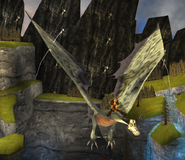 Typhoomerang Breaking
Add a photo to this gallery 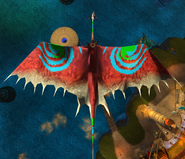 Typhoomerang War Paint (lower view and underwings)
Add a photo to this gallery
Retrieved from "https://dreamworks-school-of-dragons.fandom.com/wiki/Typhoomerang?oldid=41806"
Community content is available under CC-BY-SA unless otherwise noted.