Underwater Sections are a new mechanism that were added in The Secret of Leviathan expansion. There are two Underwater Sections, one consisting in diving into The Ship Graveyard's Ocean and, the other between the Impossible Island's Eruptodon Temple to the Dragon Bloom Room.

This is the first time where underwater sections are implemented into the game.

The first underwater section is unlocked with the mission Key Finders, where the player has to look for the "Dragon's Jaw" shipwreck, use the Diving Bell and search for the key to the Eruptodon Temple. 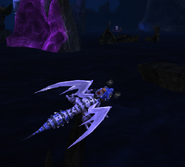 The Underwater Section is located to the right side of the Spawning Point, Johann's ship will be there with the Diving Bell. In order to go underwater, the player has to click the Bell, which will trigger an animation of the Bell diving.

When underwater, the controls are somewhat similiar to a Dragon's Flight, however, more slippery and slightly tankish.

Just like a Dragon's Flight, you have to hold the Space Bar to continuously accelerate and hold the Left Shift to fully break. However, because it's slippery and, with the removal of the diagonal movement (becoming tankish), it can be hard to control the viking in underwater.

The moment the player enters, one notices a bar in the middle of the screen: The Oxygen Meter

The Oxygen Meter serves as a way to balance the time the player can stay in the water. The Meter goes down as soon as the player starts playing and goes down pretty quickly; if it reaches around 1/4 of the bar, it will blink red. The only way to regain oxygen is by going to the bell.

If the player ignores the meter and the meter runs out, it will rapidly drain your Health until it reaches 0HP. If it reaches 0HP, you'll be immediately teleported inside the Bell.

When nearby the bell, the

buttom appears and triggers an animation of the viking emerging inside the bell. Inside the bell, your Oxygen Meter will restore rapidly (if health was drained, the Health will recorver rapidly too) however, you can leave and re-enter the bell at anytime. When ready to go back into the water, press the

buttom to submerge back into the water (also triggering an animation); keep in mind that neither the Oxygen Meter nor the Health Bar restore while in the water.

The animation is always triggered everytme the said buttoms are pressed.

Clicking the rope brings the player out of the underwater section.

Player emerging from the water

Player submerging back into the water

In the middle of the The Labyrinth mission, you'll find a flooded exit and, the only way to continue is by building a breathing apparatus and enter the flooded exit. This time around, with the Krayfin pumping the air, you don't need to worry about the Oxygen.

Strangely enough, the player can go back to this Underwater Section and, even without the Krayfin, you still don't need to worry about the oxygen.

Outside of the Underwater Section, the player can wear the Dive Helmet (whom won't show the hose); however, the cloth mask you recieve in Return to Dragon Island, for unknown reasons, it goes through the helmet. 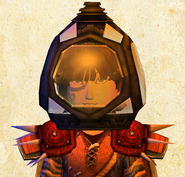 The Dive Helmet as seen in the customization screen

The Dive Helmet (back view) 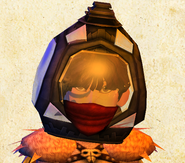 The Cloth Mask passing through the Dive Helmet

The controls are the same as walking around with the viking, however, you can't jump while underwater and, you walk quite slow due to being underwater.

The location itself is a large, underwater cave with numerous replics and broken statues. The player can only walk on the path, any attempts that walking to the walls will be blocked with an invisible wall. In one of the dead endds with broken statues, you'll find the key for the door.

The Player with the Dive Helmet and hose

The Entrance to the Underwater Section 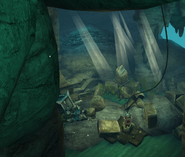 In the quest Is Harald Our Last Hope? you are asked to dive in the sea around Stormheart island.

The Underwater Section is located to the right side of the Spawning Point, The Archaeologist's ship will be there with the Diving Bell. In order to go underwater, the player has to click the Bell, which will trigger an animation of the Bell diving.

After finishing the expansion, however, the player can just simply swim on the ocean and click

The controls are the same of The Ship Graveyard Underwater Section.

Inside said cave, there's a small campfire and another exit/entrance; you'll encounter a crate with Grimora Venom whom the player has to destroy. For unknown reasons, there's an invisible wall blocking the other exit.

The Entrance to the underwater cave

The Cave (with the crate full of Grimora Venom)

In the quest The Trouble With Lumie you are asked to follow the Luminous Krayfin underwater, near the coast of Vanaheim, in front of a small beach on the east coast (from the spawning point on the Sentinel's sea stacks). You need to click on the Krayfin to go underwater.

The controls are the same of The Ship Graveyard Underwater Section, but you now will gain oxygen entering some big shells. Approaching one will show the

The first section is a sea tract with limited visibility due to rocks and algae. The second section is a cave labyrinth, make sure you have the quest arrow option on, because it's easy to lose sight of the Krayfin, especially when you're also focused in finding the shells for the oxygen.

The cave then end up on the open sea, near a rock wall, where the remains of old leviathans can be seen. 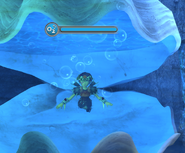 The shells that give you oxygen

Leviathan remains
Add a photo to this gallery
Retrieved from "https://dreamworks-school-of-dragons.fandom.com/wiki/Underwater_Sections?oldid=42924"
Community content is available under CC-BY-SA unless otherwise noted.