"While some dragons can be as bold and courageous as a Deadly Nadder, others tend to be more attuned to the gentler and cautious side - but that doesn't mean these kinds of dragons aren't daring and tenacious in their own way! Even the WINDWALKER will have you know that it's not afraid to step up to the plate when the time calls for it, especially if it means protecting their own young from grave danger. This was definitely something Heather learned after being challenged to a seemingly innocuous race.

It was on her way back to Dragon's Edge with Windshear, when what Heather hoped to be a peaceful return trip quickly changed, as she and Windshear found themselves challenged by this seemingly playful Tidal Class dragon. Enticed by the desire to experience the thrilling adventure of a race between two nimble creatures, Heather chose to accept the challenge and let the two dragons tango through the air - right up until she realized that the dragon was actually leading them to a different island altogether!

Quickly returning to a more guarded approach, she and Windshear fell back to watch where this dragon headed, and they soon found themselves engaged in a mission to help their new-found friend rescue its eggs before trappers came back to collect their bounty. And because of this slight change to their return trip, now all Vikings on campus have the chance to train this lithe and incredible creature of the skies!

Are you prepared to watch the magnificent transformation of the WINDWALKER unfold? Then head to campus to begin this bonding experience of a lifetime today!"

Windwalker Swimming (back view and animated)

Close-up of a Windwalker's claws

Lenght comparison between a Viking and an adult Windwalker 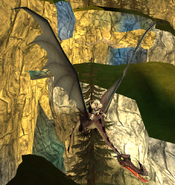 A Windwalker flying in the Hidden World Annex

Close-up of dorsal and tail patterns

Close-up of tail and limb patterns